Warning: "continue" targeting switch is equivalent to "break". Did you mean to use "continue 2"? in /homepages/3/d374100216/htdocs/nemomusic25/templates/nemomusic_template_1784_edit/functions.php on line 183 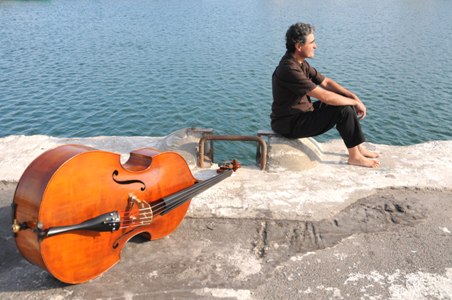 Renaud Garcia-Fons was born in 1962 near Paris to parents from the Catalonia region of northeastern Spain, and was introduced to music at age five, taking up the piano and classical guitar. As a young man, he studied the double bass at the Paris Conservatory of Music, performing in its orchestras and refining his knowledge of music theory and performance. He also became the private student of François Rabbath, and through him gained a profound knowledge of the double bass as well as an introduction to the Syrian roots of Rabbath's compositions; and as a member of Le Big Band Roger Guerin, he performed side-by-side with some of the most renowned of jazz drummers, including Kenny Clarke and Sam Woodyard.

By age 21, Renaud had won performance competitions held by the cities of Paris and Aubervilliers, and was awarded a diploma by the French Cultural Minister as Professor of Double Bass. From this point forward he worked independently, allowing his adventurous spirit to liberate him from the technical limitations of his instrument in favor of greater freedom to improvise; and to explore music at the crossroads of jazz, traditional, and contemporary music. Ten years into this journey, he decided to add a fifth string to his bass, enabling possibilities well beyond the idea of the double bass as an accompanying instrument and particularly the option to be one of an ensemble's improvising voices. Combining this innovation with his con arco and pizzicato techniques, he reached an unprecedented level of performance. Some began to call him the “Paganini of the double bass.” While this has been a great compliment, a more accurate comparison is to Astor Piazzolla, Jimi Hendrix, and Paco de Lucia – artists who have advanced the possibilities of their instrument on the force of selfdirected study and research. As a member of the Orchestre des Contrebasses and later of the Orchestre National de Jazz directed by Claude Barthélémy, Renaud's knowledge of jazz and improvisation deepened, and brought him into direct contact with many leading European and American jazz musicians.

The art of improvisation became a central element in his artistic vision. There are multiple sources for his musical inspiration. He feels as close to the Flamenco tradition, which he has transposed for the double bass, as to the music of the Mediterranean and Orient. This has led him to collaborations with David Dorantes, Gerardo Núñez, and Esperanza Fernandez, as well as Angélique Ionatos (Greece), Cheb Mami (Algeria), Dhafer Youssef (Tunisia), Huong Tanh (Vietnam), and Kudsi Ergüner (Turkey).

Renaud Garcia-Fons page two Renaud has led a variety of ensembles including the Oriental Bass ensemble, Navigatore 5tet and 8tet, and he has given solo concerts whose title is Pilgrim. Over the past three years, he's performed most frequently with his trio, consisting of Flamenco guitarist Antonio “Kiko” Ruiz and percussionist Pascal Rollando. The trio has evolved into a new quartet with the addition of accordionist David Venitucci who performs on La Línea del Sur. Also new is Renaud's collaboration with Flamenco dancer and singer Sabrina Romero in both solo and quartet settings. In addition to his own ensembles, Renaud is a member of a trio led by the Vietnamese-French guitarist Ngyyên Lê; a duo with French guitarist Sylvain Luc; a trio with Flamenco guitarist Gerardo Núñez and percussionist Cepillo; and a quartet focused on Indian music with Anindo Chatterjee (tablas), Ken Zuckerman (sarod), and Keyvan Chemirani (zarb). In parallel with his career as a performer, Renaud has been a prolific composer, fulfilling commissions as well as broadening the repertoire of his performing ensembles. At the Scene Nationale de Sceaux in October 2004, he presented World Chamber Music, a piece for string quartet, double bass, and two instruments of Eastern origin: the bansuri, a fute prominent in northern Indian music; and the riq, a small tambourine equipped with cymbals that is played in all Arab music.

A commission for the anniversary of the Entente Franco-Ecossaise ofered an opportunity to bring together artists of diferent worlds. For this occasion Renaud composed a piece in five movements for his trio and seven soloists from the Scottish Chamber Orchestra. Tutti orchestral sequences alternate with more intimate orchestrations, giving individual chamber orchestra members an opportunity to join the trio in improvisation. Renaud and the soloists gave the work's premiere in Scotland in late October 2004 and, the following month, performed it in France at the Festival de la Côte d'Opale and at the Grand Théâtre de Dijon. In 2007, Opera de Lyon gave him carte blanche to program five evenings of concerts.

Renaud chose to perform solo, in duos with Sylvain Luc and Claire Antonini, in trio, and premiered the repertoire from his quartet recording, La Línea del Sur. The following year began with Paquito D'Rivera's Concerto for Clarinet, Double Bass, and Symphony Orchestra, written in tribute to Cuban double bassist Cachao and premiered in Spain's Canary Islands with Renaud on double bass. That summer, Renaud visited Canada for the first time, giving festival performances in Toronto, Ottawa, Vancouver, Calgary, Montréal, and Québec, and gave his first performance at the North Sea Jazz Festival in the Netherlands. The Montréal Jazz Festival invited Renaud to return in 2008 for its prestigious Invitation Series, where artists are presented in three distinct musical settings in the course of three successive nights. He performed in two duos – one with Flamenco dancer Sabrina Romero and another with accordionist Jean-Louis Matinier – and then with his La Línea del Sur quartet. The summer also brought recognition from the International Society of Bassists, which gave Renaud its biennial award for Solo Performance.

In March 2010, the Deutsch Phono-Akademie chose him for its 2010 ECHO Deutsche Musikpreis for international bassist of the year and the recording La Línea del Sur. And in October, the Bienal de Flamenco de Sevilla awarded its Giraddillo de Oro prize to Renaud, marking the first time a double bassist has received this prestigious Flamenco award. For its 2011 edition, Germany's Kurt Weill Fest commissioned Renaud to compose and perform new music for the showing of the film classic Die Abenteuer des Prinzen Achmed directed by Lotte Reiniger. This new work has toured in Europe since its festival premiere. Renaud has also been commissioned by Ballet du Grand Théâtre de Limoges to write music for the ballet Carmen in collaboration with choreographer by Sergio Simon for premiere in 2012. And in September 2011, Renaud recorded two nights of solo performances in a 12th century church "Le Prieuré de Marcevol" close to Perpignan in french catalonia. 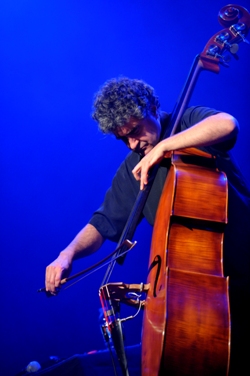